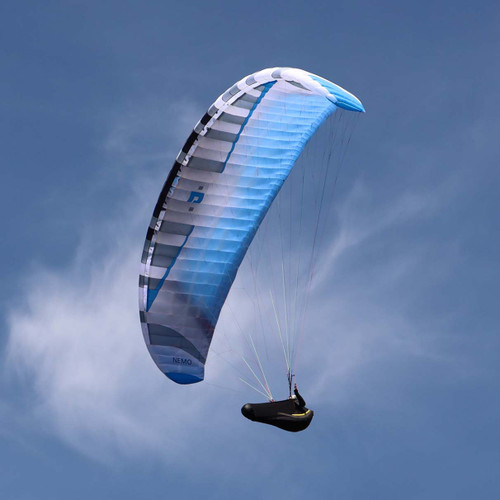 The Nemo 5 is the latest version of Dudek's classic and fun paraglider with even better performance, increased lateral stability and good maneuverability. Perfect for free, winch or powered flight - always at the highest safety level. Its capabilities will satisfy most pilots for a long time after completion of their initial training, while preparing them for further development.

The changes in the new version of Nemo were aimed primarily at better in load distribution within the canopy.

By changing the curvature of the wing, Dudek obtained greater lateral stability, while maintaining good maneuverability compared to other wings in this class.

For the main lines in A and B rows we used Dyneema lines, which, thanks to their high bending resistance, can be much thinner compared to their Technora counterparts. The shrinkage effect of Dyneema has been minimized as these lines tend to be loaded the most. Thinner lines result in less drag which translates into better performance.

All sizes have passed the certification procedures, receiving EN/LTF A category.